Painting In The Summer

Now that summer has arrived and we can open our windows and let the fresh air in, it is a great time to catch up on some of those inside painting projects and touch ups that you have wanted to get at.   Here are a few tips that will really give the DIY’er a great professional look and feel when it is done.

Always use primer before paint.  The primer gives the paint a great surface and brings out the paint’s true colors when you are done.

Use professional tools.  Use a cutting brush or edge pad when painting around ceiling edges, corners or door frames.  These tools will really make your walls look finished and great.  Using a roller instead of brushes will help to speed up your job and give you a great even coat on your walls.

Think ahead.  Being prepared can make a huge difference.  Do wall repairs before you start painting.  Wash each wall as well.  The surface should be clean, and in good condition for best results.

Cover the door knobs.  Use a small plastic bag on the doorknobs to keep paint off of them and be sure to use painter’s tape around the mounting plate for clean edges.

Keeps your eyes ahead.  Looking back in an area while it is drying may make you want to go back over it.  This can lead to marks and streaks in the paint’s surface.  If you need to do touch ups, wait until the end.

Don’t paint the floor.  Using a drop cloth can save you from spilling on the floor and wasting a lot of time cleaning up.

What about the wall plates?  Remove them and tape off light switches and outlets.  This will give you a more professional look when you are finished.  Do not paint over the outlet.  That is a very unsafe habit, and can even cause an electrical fire.

With these easy tips you’ll be painting like the pros and have an amazing looking new room!

Please comment and give us any of your tips that we can use in a future blog post to help others as well. 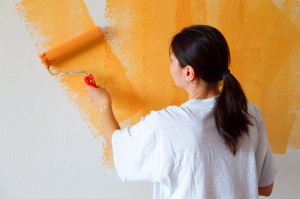